Museum of the History of Volgograd Electric Transport

The Volgograd Electric Transport Museum, dedicated to the development of electric transport in Tsaritsyn — Stalingrad — Volgograd, was originally opened in 2000 in the House of Culture of the Voroshilovsky District. 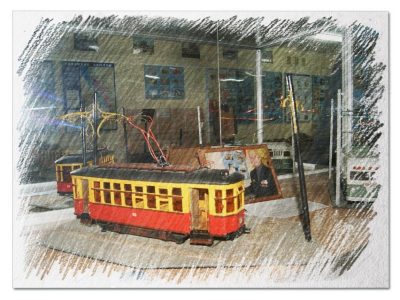 It displayed personal belongings of transport workers, original documents and rare photographs. Over time, the museum needed additional space. Indeed, the largest exhibit could not get into its territory. The museum is located in the building of the tram depot No. 5 of the MUP Metroelektrotrans.

The visitors will be also surprised by a Czech-made Tatra T-3 two-door carriage number 5463. This tram has been operating on the city’s routes for 40 years and has become a major exhibit of the museum in the open air. In addition to an informative tour of the museum premises, tourists are offered interactive entertainment — translate the arrow with a special crowbar, sit in the driver’s cab, raise the pantograph, press the pedals on the stroke and the brake to feel like a real tram driver. Guided tours are offered but a previous appointment is necessary.