In the second half of the twentieth century, the park area between st. Degtyarev and the Mokra Mechetka ravine was for a short time popular among local residents as a culture park with attractions. Later, the park was abandoned and unattractive for walking. Until now, from the park alley, you can see a breathtaking panorama of the ravine and the floodplain of the Mokraya Mechetka river. 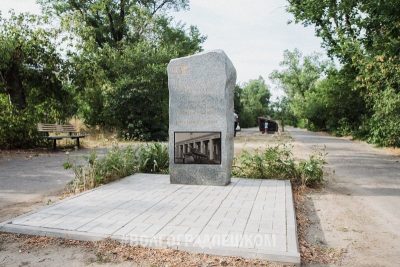 One of the corners of the park is called «Alley of Labor». The marble plaque reads: «This Alley was planted on April 22, 1980 by the 7,000-strong Komsomol in honor of the heroic labor on the construction of the Stalingrad Tractor Plant.»

By 2010, it was decided to restore and improve the alley. Monument to the Seven Thousanders Komsomol — a memorial erected in November 2015 on the central alley of the park, perpetuates the memory of the labor feat of the Komsomol members who participated in the construction of the Stalingrad Tractor Plant. The enterprise was being built at an accelerated pace, starting in 1929. The whole country followed its construction. Maxim Gorky, who visited the construction site in August 1929, was delighted with the selfless work of the «seven-thousanders». After him, writers Alexander Fadeev and Mikhail Sholokhov visited Traktorostroy. In June 1930, the first tractor rolled off the assembly line.

In the Komsomolsk Park, on the central path, there is a place marked with a memorial sign made of granite stone on a concrete pedestal. The text of the memorial inscription: «Here on August 23, 1942, the soldiers and commanders of the 21st separate training tank battalion were the first to enter the battle and stop the enemy tank column.». On the slopes of the Mokraya Mechetka River, militias from the Tractor Plant rushed to the aid of the tankmen of the 99th Tank Brigade and the 21st Training Tank Battalion. Soviet tank crews set a trap for the enemy. Skillfully camouflaging their combat vehicles, the militia let the enemy columns go into the depths of the defense. They knew that the enemy motorized infantry must inevitably go straight to the firing positions of the tankers, who were on the back ledge. The tactical plan was a success. Unable to withstand the sudden attack of the militia, the Nazis retreated.

The monument was put on state protection in 1997 as a memorial burial in 1942. Presumably, it was here in 2014 that a bottle with a note about the burial of 33 Soviet soldiers was found, the names of ten of them are known. Until now, they have all been considered missing. Search engines continue to search for information about the fighters.

In April 2019, a monument to the children who died during the Battle of Stalingrad was unveiled on the main alley. As you know, civilians remained in besieged Stalingrad in 1942. The survivors after the liberation of the city participated in clearing the streets of rubble, debris and bodies of the dead. Among them were those who devoted their entire lives to the restoration of their hometown.

The monument is a memorial granite slab with an engraved inscription:«Eternal memory to the heroes, we remember you.» . It was created to express the respect of Volgograd residents for many thousands of children who did not live to see the end of the most important battle of the Great Patriotic War.