The main composition of the square began to form in the 1930s at the entrance to the central checkpoints of the Stalingrad (Volgograd) Tractor Plant named after I. F.E.Dzerzhinsky. For almost a century, the square has been reconstructed many times under the influence of historical events and architectural solutions. In the Stalingrad pre-war period, the central part was decorated with a sculpture of the communist party leader Felix Edmundovich Dzerzhinsky (1877-1926), flower beds and small forms glorifying the socialist system. After the war additional objects on the square were: mass graves of the defenders of Stalingrad, a T-34 tank on a pedestal, and a memorial stone.

The architects of the square. F.E.Dzerzhinsky in the period 1966-1974, architects I.S. Nikolaev, B.A.Gekker, D.V. Ershova acted. In connection with the reconstruction of the First longitudinal highway, the pedestrian zone of st. them. Dzerzhinsky has changed, the square has ceased to be the starting point for the oldest historical street Traktorozavodsky district. Street and square. FE Dzerzhinsky are currently connected by an underground pedestrian crossing.

Initially, the project of the square was supposed to include a recreation area with green squares, flower beds and fountains. The landscaped square is located on the south side of the central entrance of the plant, but there are no fountains in the square. 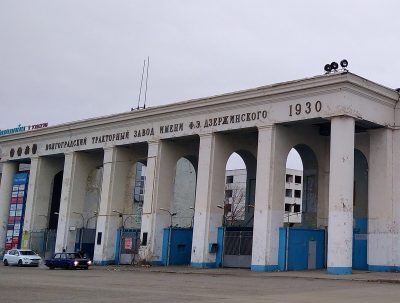 The main entrance gate of the plant has long been the most notable historical and architectural objects of the square. Built according to the project of the architect I. Nikolaev. Five passages lead through the arched entrance. Above them the inscription: Volgograd Tractor Plant named after F.E.Dzerzhinsky. 1930 «. Also above the entrance there are images of four state awards of the plant: two Orders of Lenin (05/17/1932, 01/14/1970), the Order of the Red Banner of Labor (02/08/1942), the Order of the Patriotic War I degree (01/07/1945). Memorial plaques and bas-reliefs placed at the entrance to the plant are less noticeable to an outsider:

— a granite plaque with a bas-relief of the party leader Grigory Konstantinovich Ordzhonikidze, commemorating the event associated with his performance at the STZ in April 1930 in front of engineering and technical workers;

— a granite plaque with a bas-relief of the party leader Mikhail Ivanovich Kalinin, who visited the plant on June 9, 1930;

— a black plaque with the inscription: «On February 2, 1943, the territory of the plant was completely cleared of Hitler’s hordes by units of 226 and 299 rifle divisions of the 66th Army»;

— a black plaque with the inscription: «“Here the heroes of the 37th Guards Division of General V.G. Zholudev fought to death and won. October 1942 «. 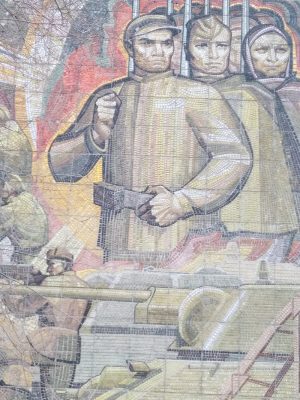 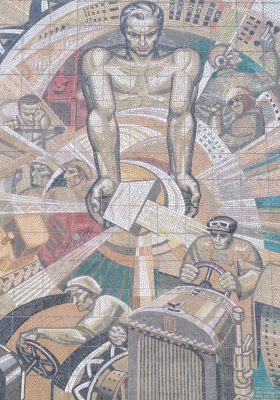 Next to the checkpoints are the buildings of the former administrative buildings of the plant. Two mosaic panels — images that are distinctive elements of the decorative design of the square. They glorify the peaceful labor and military prowess of the factory workers. The mosaic panel from smalt was made by the realist artist Pavel Fedorovich Shardakov in 1973-1980. Project architect — Boris Anatolyevich Gekker. On the left risalit of the factory management there is a mosaic called «Soldier Plant», and on the right — «Worker Plant». The size of each is 15.5×11 meters. An interesting fact: on both panels there is a single female image; on the «Soldier Factory» mosaic, the image of Pavel Shardakov’s mother, Claudia Timofeevna, is immortalized.

The once central and now frontal sculpture of F.E.Dzerzhinsky is located to the left of the entrance to the factory checkpoints. The first author’s model of the monument appeared on the square in 1932, later (June 17, 1935) it was replaced by the characteristic bronze appearance of a party leader. The author of the project is the People’s Artist of the USSR, the sculptor-monumentalist Sergei Dmitrievich Merkurov (1881-1952). The height of the sculpture is 4.3 meters, the pedestal is 6.48 meters.

After the war is finished, the pointing hand was badly damaged. The sculpture was repaired, and in 1960 the pedestal of the monument was faced with Karelian black polished granite (gabbro).

The monument came through the Battle of Stalingrad (one of four), but suffered from the indifference of economic structures — the pedestal was destroyed for many years, only in 2015 it was overhauled.

In 1936, after the installation of the monument, on the 10th anniversary of the death of F.E.Dzerzhinsky, the square began to bear his name, and in 1954 Krasnaya Street, which originated from the square, also received an identical name. 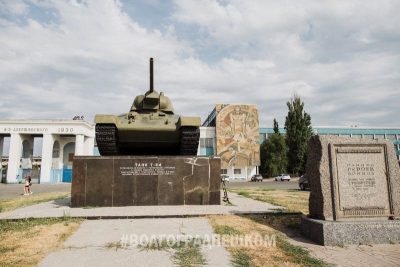 Since the mid-1940s, the T-34 tank has become a prominent object on the square. It was installed on a rectangular concrete pedestal faced with black and gray forged granite. Height — 2 meters. In 1949, the text was carved on the front side of the pedestal on black granite: «The T-34 tank was installed in memory of the heroic labor and military exploits of the workers of the Volgograd Tractor Plant during the Great Patriotic War of (1941—1945 гг.)».

For a long time, the reconstruction of 1978 determined the modern look of the square. Over times, the area did not undergo significant changes, but a remarkable object of historical heritage appeared next to the tank. On May 6, 2010, the grand opening of the memorial plate «In memory of the heroes-soldiers who died defending Stalingrad from the Nazi invaders in 1942-1943» took place. . The four-ton slab was discovered by road workers in 2008 near the ravine of the Spartanovka microdistrict. Experts have established that the monument has historical value, as one of the first Stalingrad memorials to the defenders of the hero-city (from about the end of the 1940s). Initially, it was installed over a mass grave in a public garden (opposite school No. 3), which is now located between Dzerzhinsky Square and the modern high-speed tram loop. Until 1958, on the square. Dzerzhinsky, there were burials of soldiers-defenders of Stalingrad, who were transferred to the Mamayev Kurgan. Much later, another monument was erected at the burial site in the park, and the memorial granite slab was lost until the 2000s.

A sculpture of a soldier with a light machine gun Degtyarev was erected in the park next to F.E.Dzerzhinsky’s square, where the soldiers of Stalingrad were previously buried. The event took place on February 2, 1993. During the reconstruction of the square in the 2000s, in front of the new SEC «Diamant», the sculpture was moved to a pedestal on the left side of the central entrance of the shopping complex (former factory building). Nowadays, the grayish monument is lost against the background of the characteristic color and advertising of the shopping and entertainment center «7 stars» (formerly «Diamant»). On the granite slabs of the pedestal there is an inscription: «Grateful tractor builders to the defenders of the city.».

From the northern and southern districts, squares adjoin the square. The back side is traditionally considered to be a tractor plant, now its central checkpoints and buildings rebuilt for commercial centers. The front side of the square faces the roadway connecting the First and Second main longitudinal cities, as well as the street. F.E.Dzerzhinsky, where the buildings built during the period of Stalingrad socialist realism are located.